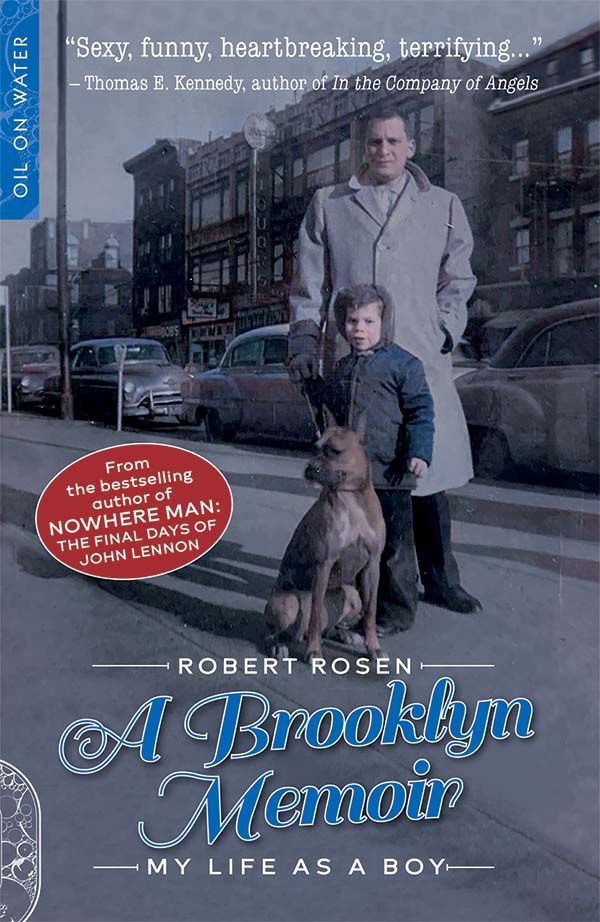 My Life as a Boy

A darkly comic and deeply moving story of a New York City lost to time.

A darkly comic and deeply moving story of a New York City lost to time.

From the final days of the Brooklyn Dodgers in the mid-1950s to the arrival of the Beatles in 1964, A Brooklyn Memoir is an unsentimental journey through one rough-and-tumble working-class neighborhood. Though only a 20-minute and 15-cent subway ride from the gleaming towers of Manhattan across the East River, Flatbush remained insular and provincial—a place where Auschwitz survivors and WWII vets lived side by side and the war lingered like a mass hallucination.

Meet Bobby, a local kid who shares a shabby apartment with his status-conscious mother and bigoted father, a soda jerk haunted by memories of the Nazi death camp he helped liberate. Flatbush, to Bobby, is a world of brawls with neighborhood “punks,” Hebrew school tales of Adolf Eichmann’s daring capture, and grade school duck-and-cover drills. Drawn to images of mushroom clouds and books about executions, Bobby ultimately turns the seething hatred he senses everywhere against himself.

From the bestselling author of Nowhere Man: The Final Days of John Lennon.

Formerly published under the title Bobby in Naziland.

Bruce AbrahamsErotic Review
Read More
To read the book is like being read to. The style and voice—matter-of-fact, witty—deliver his portrait of life growing up in Flatbush with great charm. He reminded me of Philip Roth in Portnoy’s Complaint or J D Salinger and Catcher in the Rye.

Jen SenkoDirector of The Brainwashing of My Dad
Read More
The writing is fluid and poetic. I loved this book. It was hard to put down.

The Huffington Post
Read More
A compelling portrait of a time and a place that no longer exists…. Rosen’s book is speaking for a generation.

Doug GarrFormer speechwriter for New York governor Mario Cuomo; author of Between Heaven and Earth: An Adventure in Free Fall
Read More
A poignant sketch of Flatbush during a time when the borough lost the Dodgers and the nation lost its innocence. Compulsively readable, especially for Boomers.

The Jewish Voice
Read More
You don’t have to be Jewish—or a Brooklynite—to be enchanted by this book.

Whitney StrubHistory professor, Rutgers University–Newark; author of Perversion for Profit: The Politics of Pornography and the Rise of the New Right
Read More
This is history writ with piss and vinegar, stark, unsentimental, and unexpectedly moving… A repository of postwar Jewish memory of the sort that historians can’t find in archives.

David ComfortAuthor of The Rock and Roll Book of the Dead
Read More
You might call this remarkable coming-of-age memoir a kosher Catcher in the Rye, if it weren’t in a category all its own… Brilliant, darkly comic… its characters are unforgettable and deeply moving.

J. C. MaloneSyndicated columnist for Listin Diario (Dominican Republic)
Read More
This reads as if Anne Frank had a younger, surviving brother who continued her diaries…. You feel the same honest, innocent, and candid perception of the world from a child’s point of view.

Lesley AbravanelMiami Herald
Read More
A darkly funny coming of age story that many people can appreciate now, of all times.

Marshall TerrillAuthor of Steve McQueen: The Life and Legend of a Hollywood Icon
Read More
I’m not reading A BROOKLYN MEMOIR, I’m savoring it.

ROBERT ROSEN is the author of the international bestseller Nowhere Man: The Final Days of John Lennon. His work has appeared in a wide array of publications all over the world, including Uncut, Mother Jones, The Soho Weekly News, La Repubblica, VSD, Proceso, Reforma and El Heraldo. Over the course of a controversial career, Rosen has edited pornographic magazines and an underground newspaper; has written speeches for the Secretary of the Air Force; and has been awarded a Hugo Boss poetry prize. Rosen was born in Brooklyn and lives in New York City with his wife, Mary Lyn Maiscott, a writer, editor and singer. For more information about Robert Rosen, please go to robertrosennyc.com.